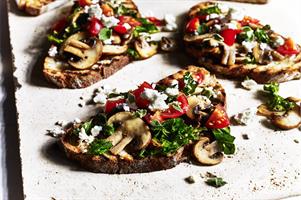 Rub the sourdough bread with half of the olive oil, season with a little salt and milled pepper and cook on a griddle pan until nice and crispy. If you don’t have a griddle pan just pop under the grill.

In a large frying pan, add the remaining olive oil and fry the sliced chestnut mushrooms with the garlic. Once soft and a nice golden colour is achieved, add the kale and cook until the kale has wilted. Season with salt and milled pepper.

Place the sourdough crostini on your plates. Spoon over the mushrooms and kale. Crumble over the feta cheese, chopped tomatoes and fresh oregano and serve with a little drizzle of olive oil and a squeeze of lemon.